I’ve had a NAS system in my house since January 2010. A NAS is a handy little thing. What is a NAS, you ask?

A NAS, or Network Attached Storage system is a computer connected to a network that only provides file-based data storage services to other devices on the network. NAS units usually do not have a keyboard or display, and are controlled and configured over the network, often using a browser. I tend to work and think on a personal, home office, or small business level, so I’ll stick with that explanation.

I’ve found 4 great reasons to use a NAS system.

With a NAS System, you can store your documents, images, and music on the network and get to them from any computer. You don’t have to keep things on a thumb drive and swap them back and forth. You don’t have to keep all your pictures on the desktop and edit them there. Store everything on the network and you can get to it whether you’re on your laptop or your desktop.

One of the big things I’m getting ready to do on my NAS is move my iTunes music off my desktop and onto the network so that we can run iTunes off of multiple computers. I’ll document that process and write a tutorial for it.

NAS systems have the ability to act like a secure server. You can access them using your favorite FTP client. (I like the Firefox Add-On FireFTP.) With this, you can access your home documents from any computer.

You can set up different folders in your NAS and have different security levels on those folders. You can have a folder that all of your employees with logins can access, or certain users, or only you.

Most Network Storage Systems come with bays for 2 hard drives. You will probably get the option to configure them as one large disks or 2 separate disks. Go for the two disks. then, when you do further setup on the system, you can set it up as RAID 0 (Striping) or RAID 1 (Mirroring). I recommend RAID 1. This means that you save everything to one hard drive and an exact duplicate is saved on the second drive. Then, if one of the drives ever fails, you don’t lose any of your data. You just replace the drive and go about your business. 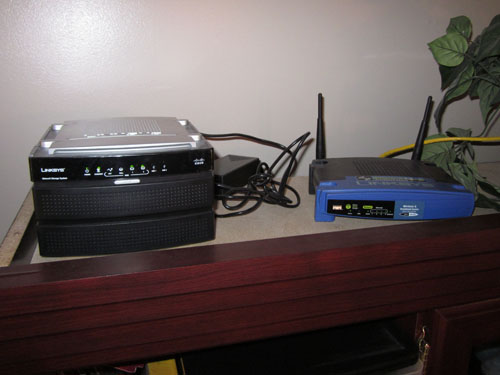 There are a lot of systems on the market. I was looking for something pretty inexpensive. Mind you, these items aren’t even available anymore. But they should give you an idea of what to look for. I’d put up a new configuration, but it seems that shortly that might not be available anymore, so what’s the point?

I have Cable High-Speed Internet. What you’re not seeing further down on my desk is my cable modem. That baby was supplied by the cable company when I got the phone service. Woo.

On the left in this photo is my NAS and on the right is my wireless router. These are both located on top of the hutch of my desk because I wanted my router up high and the NAS needed to be near the router so that it could be wired to it. My router has both the NAS and my desktop computer ethernet wires hooked into it.

Hooking this up is pretty straightforward. The beginning user probably won’t be able to use it, but anyone familiar with installing a printer or any other peripheral or software will have no trouble. Just make sure you setup a password so you aren’t supplying your neighbors with hacking fun or at least free internet. 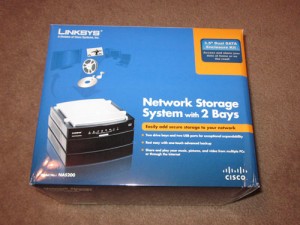 I bought my Network Storage System through Amazon. I was looking to get one on a budget and this one fit my bill. I paid $90 for it in January 2010 directly through Amazon. If you look there now – http://www.amazon.com/gp/product/B000QGTNWY/ref=ox_ya_os_product, it’s only available used for more than double that. I think not. So shop around. There are some by D-Link. What you’re looking for is a system with 2 SATA bays that don’t require cables (you just shove the hard drives in until they click into place). It needs to have the software on it to allow you to configure it, do backups, and file share. I would strongly recommend that you get one that does NOT have the drives already in it. Purchase those separately.

I bought exactly the same hard drive from two different suppliers. The reason for this is that if the hard drives are purchased from the same supplier it is likely that they were manufactured in the same lot. If one of them fails, it is likely that the other will fail in the same way at nearly the same time. You don’t want that in a RAID 1 configuration. I purchased one from Newegg.com for $56 and one from Tigerdirect.com for $55. Tigerdirect doesn’t sell it anymore and Newegg has it for $49.